A dramatic Crowdfunding campaign aims to transform the Theatre Royal Plymouth into one of the greenest theatres in the country and, at the same time, show how positive action can make cities cleaner and healthier for everyone.

Environment Plymouth is seeking to raise £60,000 to put a bio solar roof on top of the venue’s highest deck, the ‘fly tower’. If successful, Environment Plymouth, will plant nearly 200 photovoltaic panels and a high-rise meadow at the top of the iconic building and in doing so, help to make the city cleaner; the theatre more sustainable and Plymouth City Council achieve its promise to be ‘zero carbon’ by 2030.

Environment Plymouth, the award-winning network of groups and individuals who share an interest in sustainable issues, believes this will be a double first: the first biosolar roof in Plymouth and the first on any theatre in the country. Caroline Blackler, who is leading on the project for Environment Plymouth, says they are a simple, cost-effective means of tackling the climate crisis;
“Biosolar roofs have many benefits: they generate electricity; they reduce the need for air-conditioning in summer and heating in winter; they lower CO2 emissions; they improve air quality; they reduce rainwater run-off; they reduce the risk of flooding and – at the same time – they increase biodiversity. The question isn’t why are we doing it but why are we not doing it?” 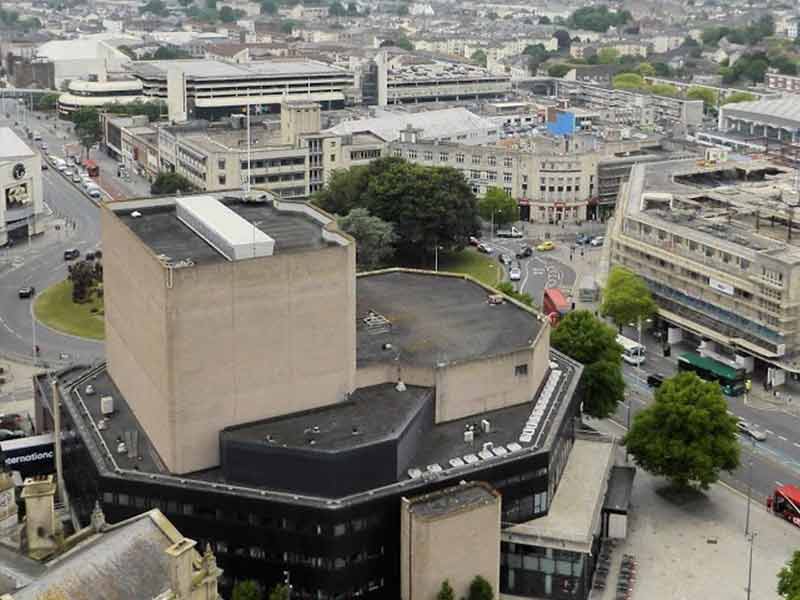 The Theatre Royal Plymouth has a fine flat roof and was selected after an initial investigation of the roof-space across the city centre. Closed since March due to coronavirus, the Crowdfunding campaign coincides with the news that TRP is to reopen in November for a series of socially distanced performances. Operations Director, Helen Costello describes the news that Environment Plymouth wanted to partner with TRP, to install a biosolar roof, as a welcome surprise;

“TRP takes its environmental responsibilities very seriously,” says Helen. “We have already managed to substantially reduce our energy consumption considerably through ingenuity and hardwork. Reducing our carbon footprint over the next two years is also something that we are required to do by our funders, which includes Arts Council England. This is a golden opportunity to continue to improve our environmental sustainability and, at the same time, raise awareness of how an under-used resource could be better employed.”
Plymouth is typical of most cities with about seventy-five per cent of the city space being taken up by roofs. Here in Plymouth, most of these city centre roofs are flat. And yet, nearly every single roof consists of barren, impermeable and unemployed concrete. Gary Grant, the Director of the Green Infrastructure Consultancy in London, says with the political will, Plymouth could be one of the greenest cities in Europe:

“With its expanse of modern buildings with flat roofs and its excellent network of city centre open space, Plymouth could be a leader in urban greening, with green roofs; green walls and rain gardens aplenty.”
It wouldn’t be the first time the city has transformed itself. Rising from the rubble of the Second World War, Plymouth City Centre was radically designed by planners Abercrombie and Watson, to be a ‘city of the future’. They produced one of the most ambitious changes to an urban environment ever seen. Bright, clean and spacious, the appearance of the city centre was created along vertical and horizontal lines gifting us a city of flat roofs. Today these roofs could be deployed to reduce the impacts of the climate crisis and enable us to renew our claim “Plymouth: a city of the future”. Isn’t that worth shouting from the rooftops.

If you would like to support the Biosolar Crowdfunder Campaign please donate what you can at  https://crowdfunder.co.uk/biosolar-tops-the-theatre-royal and follow its progress on the Environment Plymouth and Theatre Royal Plymouth’s social media pages.